WHO'S BEEN SLEEPING IN MY BED !

For any of you who has been following Michael's thread 28mmvictorianwarfare you'll know he has taken on a massive undertaking to build the attack on Schloss Itter during WW2 to run as a game at Salute 2020. With the help of James who now has a blog makeitminiature they've been progressing well.
Now anybody who has taken on a massive project like this knows how daunting it can be, so I've been looking for a way to help them, then they posted an article about adding interiors, and I found a way to help. James had made some bunk beds for the barracks, and Michael mentioned he would think about getting some mattresses for them, now finding a mattress that would fit perfectly could be a tall order, so I emailed Michael and said what about ones where the bed was made, just got out of, and still in, to help show how it was a bit rushed when the attack happened.
I did a quick Google search and found that the mattresses at the time were very thin and sometimes were just a folded blanket, I went with a mattress as I thought this would have the greatest appeal as a product when I release them. I also wanted to get the rough blanket feel that you often see.
So here's what I created 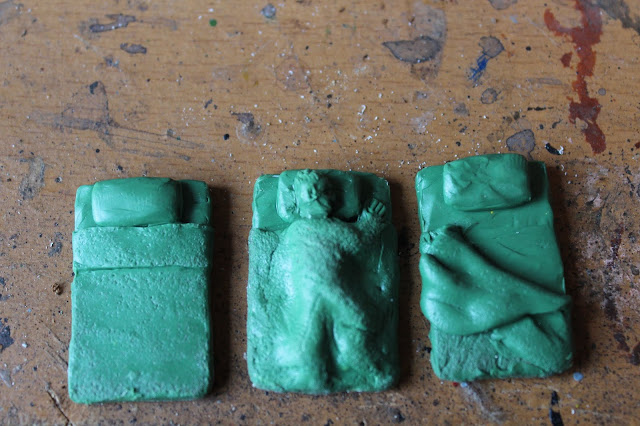 Once I've sorted the one's Michael needs I'll put them on the website, that's it for this post, so until next time have fun !
Cheers Dave
Posted by Dave Stone at 06:27