TYING IT ALL TOGETHER

With a Dark Eldar army, there is 3 main sections, the Kabal, the Wyches, and the flesh army. The Kabal has a splinter faction the Scourges (was part of the Kabal in the first codex), the Wyches have 3 splinter factions, the Hellion Skyboarders, Reaver Jetbikers, and the Beastmen ( all counted just as Wyches in the first codex), while the flesh cult has no splinter factions ( had very limited options in the first codex). So coming up with a colour scheme that ties it all together could be quite tricky, especially if you want them to tie together as well. So I went with 3 main colours bone, red and dark green, and depending on which faction had a different dominating colour. 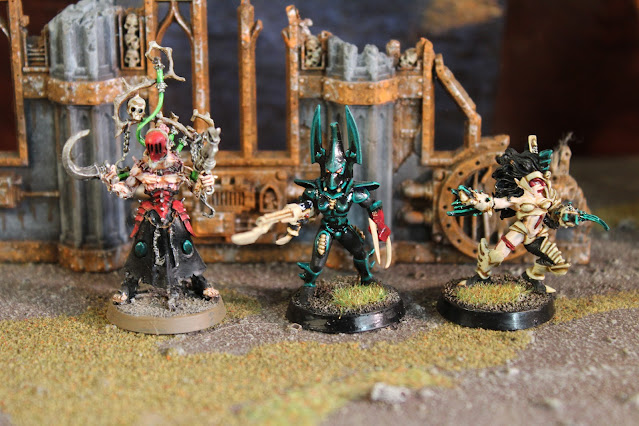 As you can see above they all look different to each other, but use similar palettes, to tie them together. I'm currently working through the Kabal squads that need finishing, and hoping to get as much as I can finished before I start work on challenge models in October, but I have got the start of a Court of the Archon done, it used to be that you stuck your Archon into a unit of Incubi, but by codex 2 you could take a very eclectic group to guard your leader instead. First up is a Medusae, this is a Finecast model produced by GW, and suffered with a lot of holes in the model, this is what 40K has to say about them :

Medusae are strange creatures of the Webway that often find themselves as servants within an Archon's court and are quite sought after by the denizens of the Dark City of Commorragh.[1]

Medusae are known to be highly empathic parasites that appear as a collection of brains and spinal cords that are stacked on top of one another. These creatures seemingly float across the ether like jellyfish where they feed on the dreams, as well as nightmares, of sentient beings. They can also latch upon a living host, allowing them to feed upon the emotions of their host directly and through this process, provide the power they require to manifest in realspace, thus becoming hybrid creatures of both the material world and the Immaterium.[1]

In combat, their empathic abilities are weaponised: a simple gaze from a Medusae can lead to instant emotional hemorrhaging by exposing their victims to raw anguish, potentially putting them into a coma from which there is no recovery. In addition, they are also able to absorb extreme sensations, which are highly prized in Dark Eldar society. The brain fruit of the Medusae are capable of being consumed and allow an individual to re-experience the vivid and anarchic emotions of a raid all over again.[1] 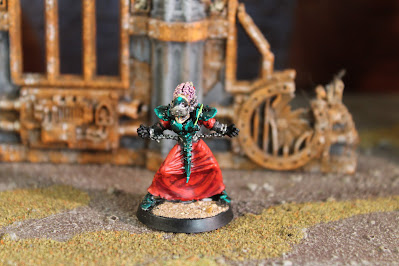 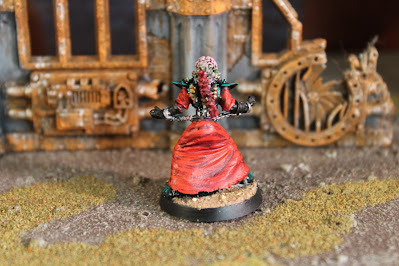 Next we have a Lhamaean, this is what 40K has to say :

Lhamaeans are courtesans that frequently are seen among an Archon's Kabal and are one of the most desired in a Dark Eldar Lord's Retinue.[1]

These women are members of the mysterious sisterhood of Lhilitu who are well known for being extremely imaginative lovers and are skilled poisoners who know no equal to their art. They are believed to be descended from the original Cult of Lhamea who in turn drew much of their knowledge from Shaimesh, the Father of Poisons. As a result, their skills in the art of poison craft mean that an Archon with a Lhamaean in their court benefits from a steady stream of virulent toxins that they willingly share with their lord before a raid into realspace. Such is their reputation that it is said that a kiss from a Lhamaean into the air is capable of killing beings within seconds.[1]

In battle, Lhamaean wield Shaimeshi Blades which can cause their enemies to die in nonporous agony with a single scratch.[3]

A quote I read in the codex inspired this conversion, as it said that even a kiss blown upon the wind by a Lhamaean can kill in seconds 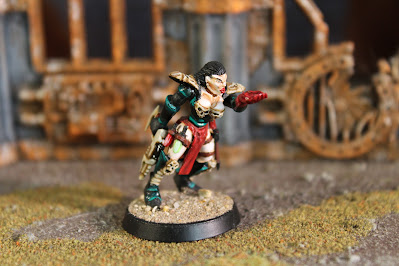 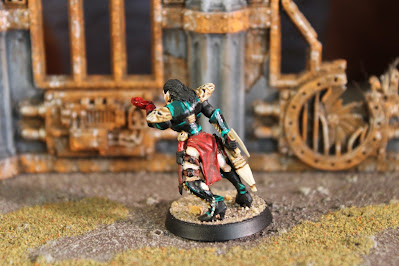 Last today I have an Ur-Ghul, this is a model I sculpted before GW released a model, and then it's just sat until now, this is what 40K has to say about them :

Ur-Ghuls (Ghala Troglodytes)[3] are a Xenos species that are native to the labyrinth ziggurats of the Dark Eldar city of Shaa-dom.

Their nature means that they are one of the many atavistic beings that can be recruited by an Archon for his court. These creatures are noted for being the most hideous of all the creatures that a Dark Eldar Archon can summon. Being sightless, yet quite agile, their tracking abilities are quite renowned and once a prey has been caught by the beast's quivering scent-pits, it is known that nothing is able to escape these whip-thin horrors. Ur-Ghuls are also known to inhabit Blackstone Fortresses.[3]

Ur-Ghul migrations are periodically purged by the Deathwatch, most notably one led by the Dreadnought Xenomortis on Plenitia.[2 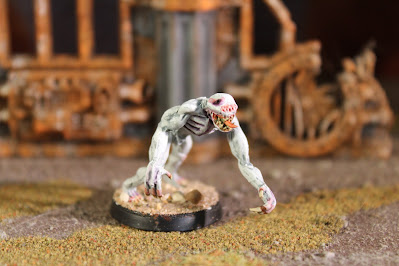 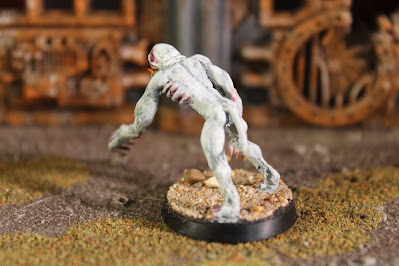 That's all for today, hopefully I can get some more finished this week, so until next time stay safe and have fun !